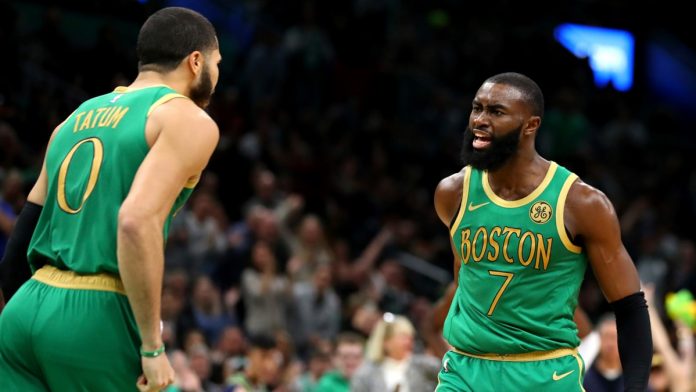 First off, Jayson Tatum. Last season, he averaged 15.7 points, 6.0 rebounds, and 2.1 assists. This season, pre-hiatus, he is averaging 23.6 points, 7.1 rebounds, and 2.9 assists. This is a huge improvement from last year, almost 8 more points per game, over 1 more rebound per game, and almost 1 more assist per game. This may not seem like an extreme amount of improvement, however in the month of February, he has averaged over 30 points per game, which would be 3rd in the NBA if he did it for the whole year. These stats show how Jayson Tatum has improved so much this year.

As many of you know, Jaylen Brown and Jayson Tatum have both improved a vast amount during this NBA season. These two guys went from role playing young guys to stars and all-star caliber players. In this article I would like to recognize this improvement, analyze it, and finish off with my prediction for these two players’ career.

For the in depth analysis of these two guys’ game, we can look at their PERs of this season. For Tatum, his PER is over 20 this season, coming in at 20.3. For Brown, his PER is a little lower, coming in at 17.1, still very good. This shows that they are both very efficient and effective players. The next advanced statistic is VORP, or value over replacement player. This stat measures how good the player is compared to the average of all of the NBA players. Brown’s VORP is 1.2, a very good number, meaning that he is much better than the average player. Tatum’s is a whopping 3.0, which takes 14th place in the league, better than many stars including Bradley Beal, Joel Embiid, Paul George, and Russell Westbrook. The third stat I would like to take a look at is BPM, or Box Plus/Minus, which showcases the player’s contributions while they are on the field. Tatum’s is 3.9, good for 16th in the league, and Brown’s is 0.9. This means they are both very good players compared to the average NBA player. I hope these advanced stats have helped you understand just how much they have grown. Don’t forget, these guys are 22 and 23 years old, neither one having hit their prime yet.

To finish this article, I will tell you guys my predictions for their careers. These predictions are assuming they stay on the Celtics. To start off, Jaylen Brown. I can see Jaylen being very good in his career. I do not see him winning any MVPs, but I think he may have a couple top 3 or top 5 finishes. I think he will win 2-3 championships, along with Tatum and three rest of the Celtics. In addition, if he sharpens his skills a bunch, I can see Jaylen winning 1-2 DPOY awards in the future. For Tatum, I think he can win 2-4 MVPs along with the 2-3 championship I see the Celtics getting during the Jays’ reign. I can see him also grabbing 1-2 NBA Finals MVPs. To wrap this up, I think Jaylen and Jayson can go very far in their careers, and they both have made many improvements this year. Thank you for reading and hope you enjoyed!